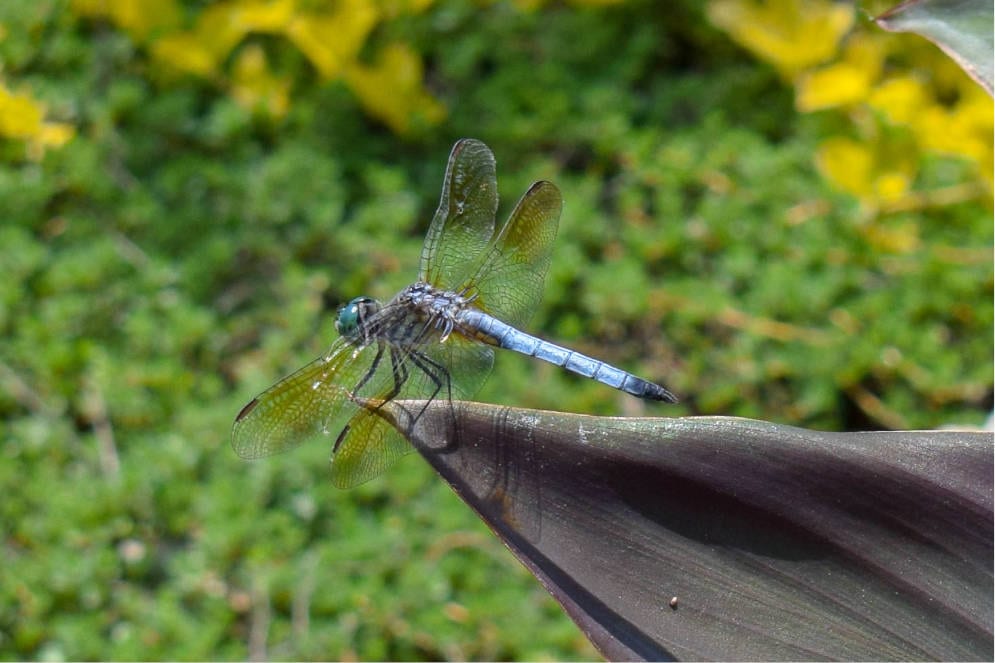 They flit like hummingbirds through the air, touching down briefly on a lilypad or piece of driftwood before zooming off again in an iridescent blur.They’re dragonflies – and there’s no place they’d rather hang out than your backyard pond. More than 450 types of dragonflies live throughout the United States, including more than two dozen in Pennsylvania and Maryland.These beautiful insects look intimidating with their long, needle-like bodies but are actually one of the most useful and fascinating animals that show up when you build a koi or goldfish pond.

At a Glance: 9 Fun Facts about Dragonflies

1. Dragonflies are the most effective hunters in the animal kingdom 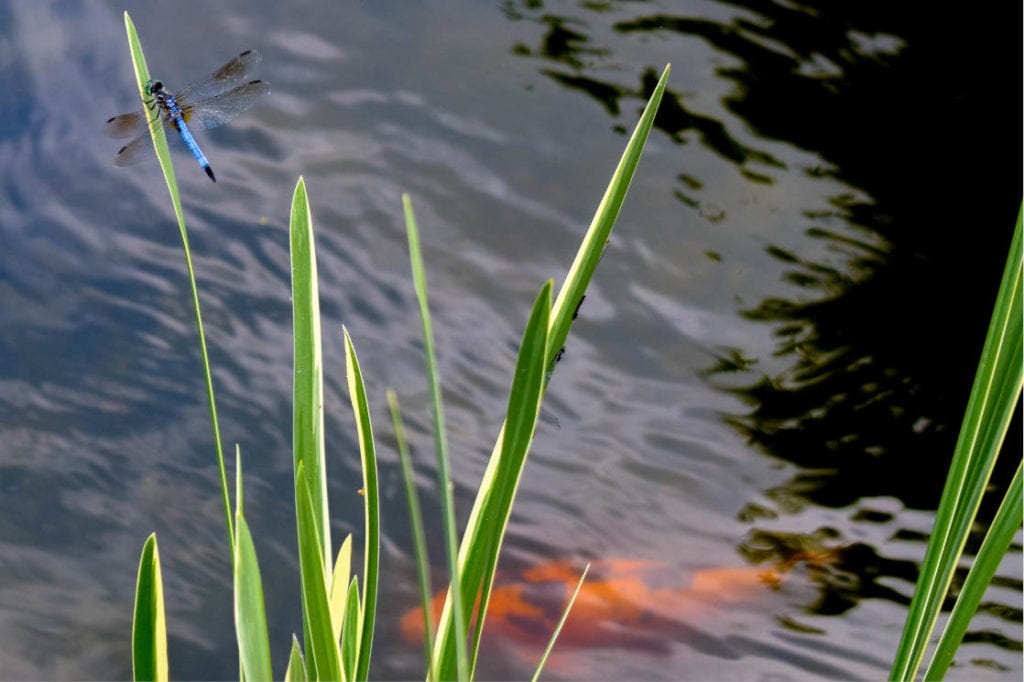 Lions and tigers and bears? They’re nothing compared to the dragonfly.

Most predators catch very few of the animals they stake out for meals. Lions, for example, only have a 25 percent success rate.

These pretty little bugs catch their prey with brutal efficiency thanks to some insane anatomy. Their super flexible wings can move independently of each other, letting the dragonfly move up, down, left and right with ease, and even hover in mid-air. Their eyes take up almost the entirety of their heads – the better to see you with, my dear – and have 30,000 lenses. Some species can even zoom toward their prey at speeds of more than 30 miles per hour. The dragonfly grabs its target using its agile feet before crushing its snack with a mouth that looks like a serrated steak knife.

Dragonflies use these advantages to fulfill their voracious appetites – eating nonstop until there’s no more prey in sight.

So what are these vicious hunters eating? Lots of other flying insects – including mosquitoes!

One adult dragonfly can scarf down anywhere from a few dozen to several hundred of these bloodsuckers in a single day. Dragonfly nymphs provide additional population control by snacking on mosquito larvae.

If you ever walk through our display gardens at Splash in York, PA, you’ll find nary a mosquito in sight. You can thank our robust dragonfly population for that. Most yards with ponds, in fact, have fewer mosquitoes than ones without, in part because of the way ponds attract dragonflies.

3. Dragonflies live near ponds – but will hang out near any body of water 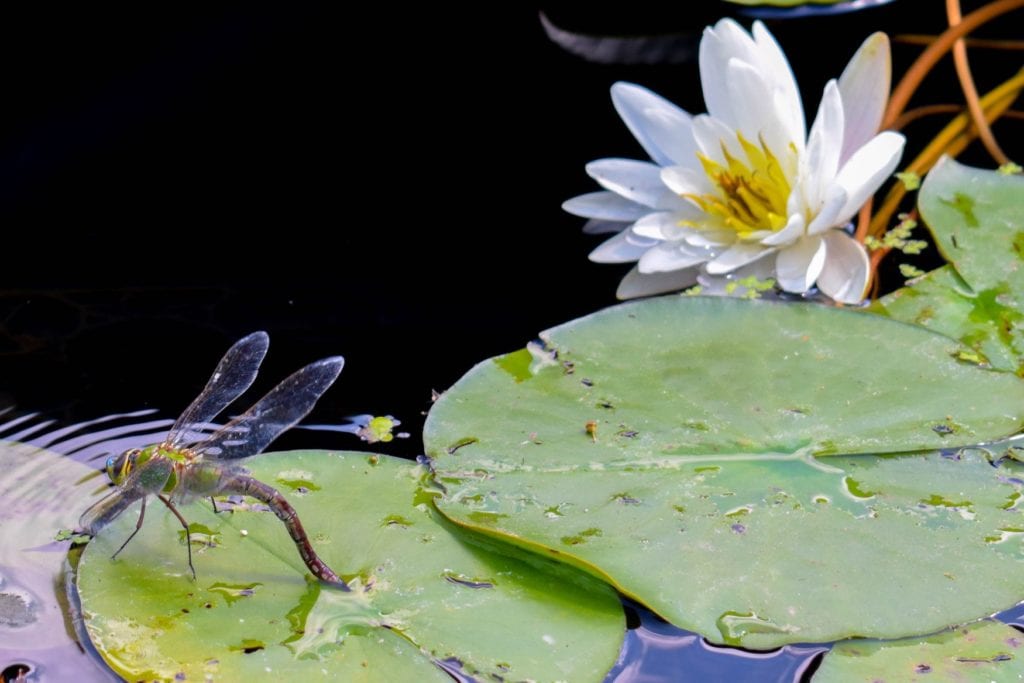 Dragonflies like to lay their eggs in just about any shallow body of water. Some have even been known to wander into car lots, where they mistake the sun’s reflection off the metal for a shimmer of water.

Dragonflies by far, however, prefer one specific kind of home: ponds. A backyard pond gives a dragonfly all the food and shelter it needs to lay eggs and live life with a full belly.

4. You can attract dragonflies by installing a pond filled with plants

The best way to attract dragonflies to your yard is to install a pond. Dragonflies need water where they can deposit their eggs. Once these eggs hatch, the babies – called nymphs – spend some time living underwater before emerging as the flying beauties we know and love.

Rocks, cattails and grassy foliage like sweet flag all give dragonfly babies a place to hide. Waterlilies give the dragonflies a place to lay their eggs, as well as somewhere to rest their weary wings after they take flight.

Plants not only attract dragonflies but also other friendly critters like frogs and toads. Plants have the added bonus of preventing string algae, so make sure you stock up.

5. Dragonflies do not bite or sting people

Dragonflies do not sting and rarely bite people, so you don’t need to panic if one decides to perch on your arm.

Any animal with a mouth will bite if it feels threatened – and dragonflies are no exception. Dragonflies, however, are usually docile – despite their menacing appearance – and most species’ mouths are too small to break human skin.

6. That bug by your pond might not actually be a dragonfly 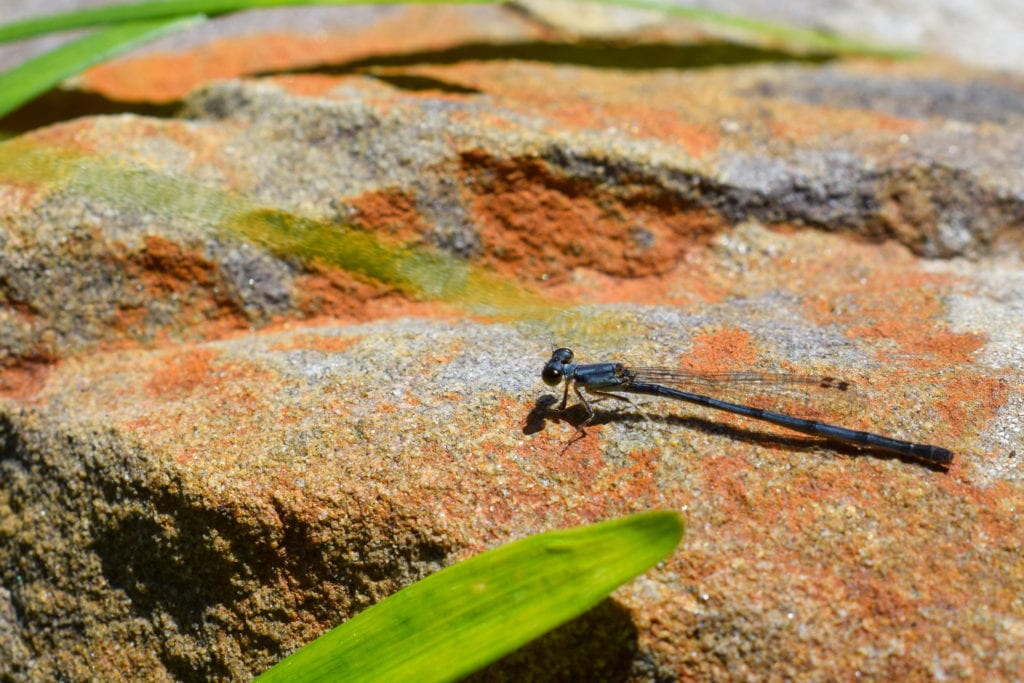 Is that a dragonfly? Nope! This is a Common Blue Damselfly.

Not all slender-bodied flying insects are dragonflies. What you see by your pond might actually be a damselfly.

So what’s the difference between a dragonfly and a damselfly?

While both are part of the order Odonata and have similar needle-shaped bodies, dragonflies are usually larger than damselflies and a bit more agile in the air. Dragonflies also tend to spread their wings out on either side of themselves when they land, while damselflies fold their wings together.

Both dragonflies and damselflies love to hang out around ponds and make great additions to your backyard ecosystem.

7. Dragonflies live most of their lives as ugly water-bound bugs 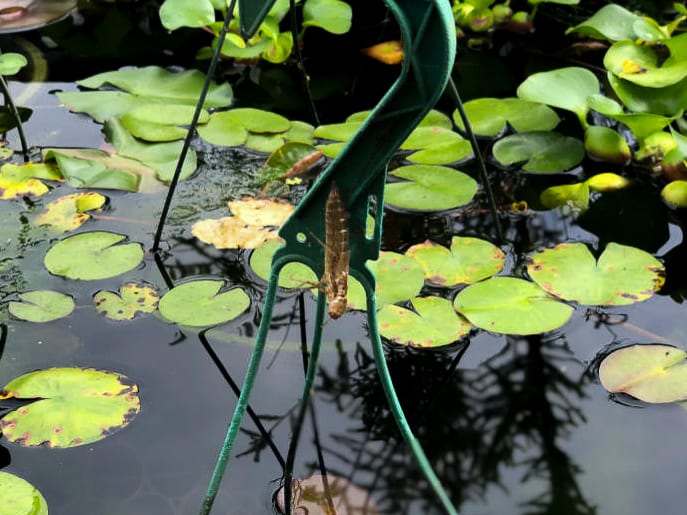 Dragonflies don’t start life as the beauties we know and love. Instead, they emerge from their eggs as brown, wingless larvae – also known as nymphs. Some species of dragonfly spend years in this phase.

Dragonfly nymphs eat just about anything that will fit in their mouths. They use all this stored up energy to ready themselves for their final transformation into their adult stage.

This last transformation – technically a partial metamorphosis – starts with the larva clinging to a vertical surface. It then sheds its hard outer skin and emerges as a winged adult. You might find the discarded shell on your pond plants, garden decor or – if you’re like us – clinging to vertical plant hangers.

8. Dragonflies are not flies (or dragons)

Dragonflies are not closely related to houseflies; instead, they’re part of the scientific order Odonata. This order includes the dragonfly and similar-looking damselfly. The term Odonata comes from the ancient Greek word for “tooth,” an homage to dragonflies’ large, serrated mandibles.

The “dragon” part of dragonfly likely comes from Romanian folklore. St. George, the tale goes, once defeated a dragon that lived in his town’s pond. In retaliation, the devil turned St. George’s horse into a large flying insect. Romanians use the same word – “drac” – to mean both devil and dragon, which might explain why we call the Romanian “devil’s fly” a dragonfly in English. 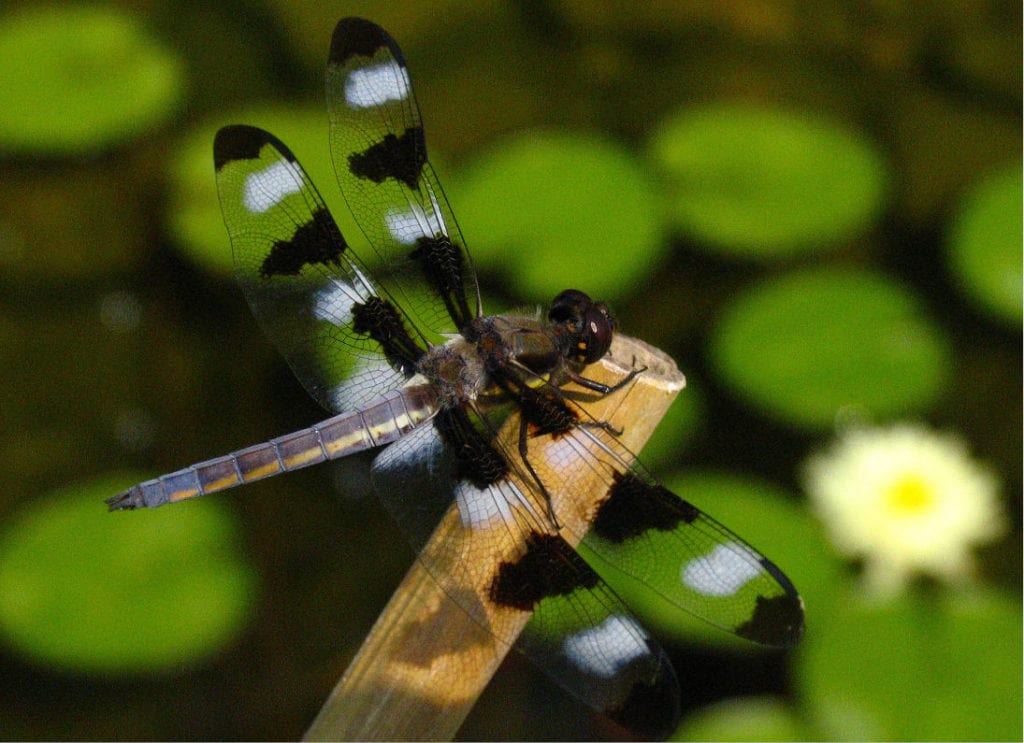 Dragonflies have flown through history for more than 300 million years – some fossils have shown dragonflies with wingspans of nearly 3 feet! – so humans have had plenty of time to spin lots of mythology around these unique-looking creatures.

Dragonflies most commonly symbolize luck and metamorphosis. Anglers, for example, once thought that seeing a dragonfly hovering above water was a sure sign of a bountiful day of fishing.

Other myths connect dragonflies with more sinister symbolism. One wives’ tale says that dragonflies stitch shut the mouths of naughty children in their sleep, while Welsh folklore says they follow snakes and mend their wounds. A Portuguese myth claims dragonflies poke people’s eyes.

Regardless of the myths, we know that anyone with dragonflies in their yard should count themselves lucky. Dragonflies are fun to watch and keep away mosquitoes. What more could you ask for?

Live near Central PA/Northern MD? We can design your perfect backyard oasis.

Want to build your own pond? Start here.