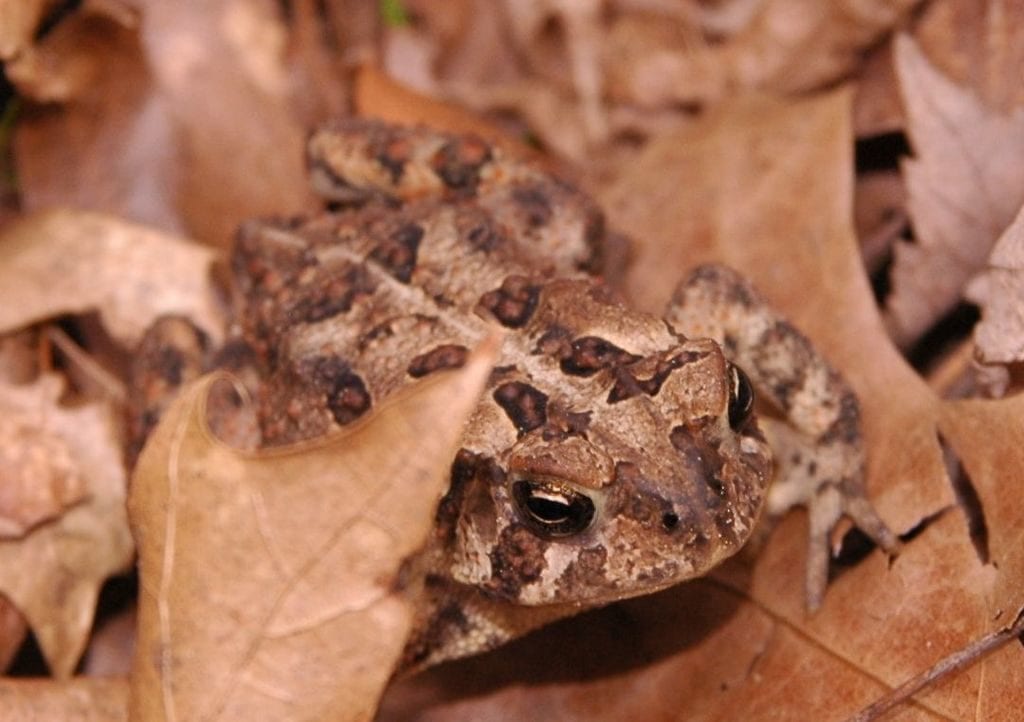 Have you ever heard a long, ringing call resonate from around your pond? If so, some American Toads might have made a home in your backyard

American Toads are extremely common in areas like Pennsylvania and Maryland. While they can live in any backyard, they’re especially well-suited for the areas around your pond. There, they have lots of plants in which to hide, plus easy access to shallow water where they can lay eggs.

American Toads are perfectly harmless to your fish and plant life. The sight of them hopping around your pond’s edges and sounds of their distinct mating calls are just some of the many benefits of creating your own backyard pond ecosystem.

At a Glance: Meet the American Toad

These pond visitors typically have brown, gray or reddish skin, often speckled with dark spots. The exact coloring and patterns vary greatly from toad to toad – and might even change over the animal’s lifetime depending on factors like temperature and stress.

American Toads have dense patches of warts all over their bodies, but you won’t catch warts from handling them. Still, we don’t recommend touching any wild animal. Toads secrete a toxin from their skin that, while not typically dangerous to humans, can hurt dogs who pick them up in their mouths. Toads also have a habit of peeing when scared.

American Toads are usually 2 to 3 1/2 inches long. Females are larger than males (a trait known as sexual dimorphism) and often have lighter coloring.

Is It an American Toad?

The American Toad is almost indistinguishable from the Fowler’s Toad to the untrained eye. Both animals live in the same areas and have similar markings and coloring. While the two do have some slight physical differences, the easiest way to figure out which one is hanging out by your pond is to listen to their calls.

The American Toad has a pleasant, almost birdlike call …

… while the Fowler’s Toad makes a much more nasally sound: 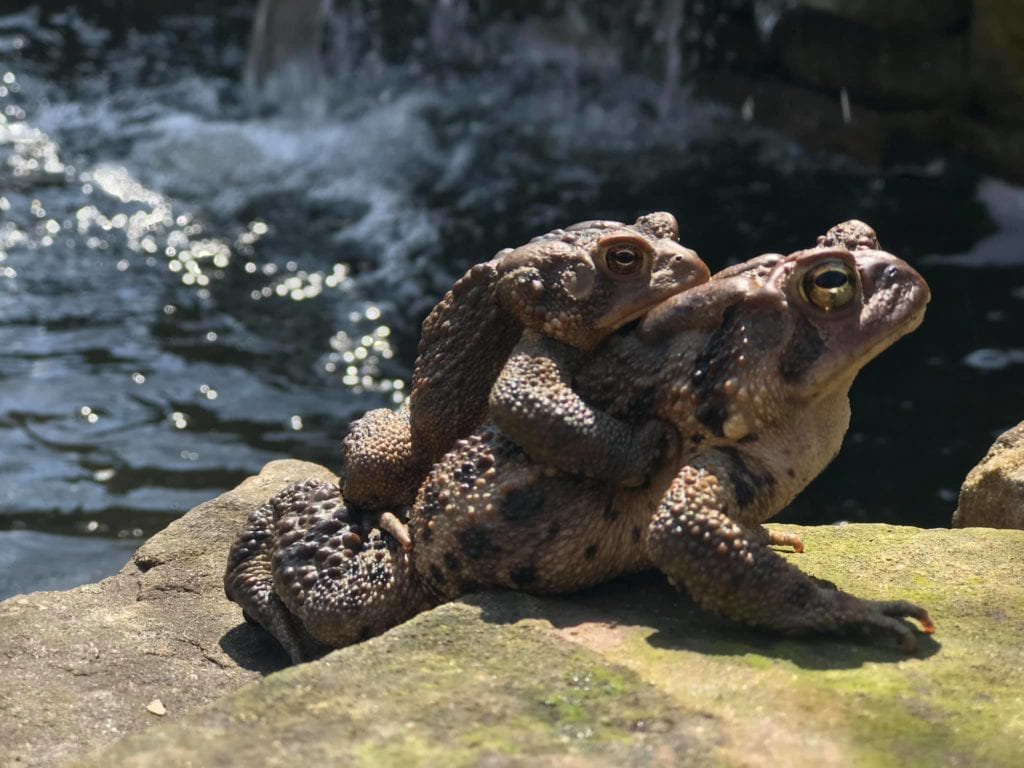 Pennsylvania and Maryland ponds are the perfect habitat for the Eastern American Toad.

These abundant amphibians appear throughout much of the eastern U.S. and Canada, serenading pond owners with their ringing calls as far north as Newfoundland and as far south as Mississippi.

The Eastern American Toad is a versatile little critter that can live in almost any kind of setting, from open fields to forests to suburban backyards. They just need plants where they can hide, soil or leaves where they can burrow and calm water where they can lay eggs.

Your backyard pond fulfills all these requirements. Toads, unlike frogs, don’t swim well, but you’ll often find them hopping around the shallow edges during mating season or hiding in your marginal plants.

Toads also love eating all the bugs that hang out around your pond. Mosquitoes, worms, centipedes, ants and any other creepy crawly small enough to fit in their mouths are all fair game. Because they can’t swim well, they typically won’t eat fish.

You’ll know when the toads around your pond are ready to make baby toads.

Males are most vocal during the mating season, which runs from about March to July in Pennsylvania and Maryland. They usually let out their calls at night, but will occasionally sing during the day at the height of the season.

The large females use these calls to help them select a mate among the smaller males. She’ll eventually lay anywhere from 2,000 to 20,000 eggs in shallow water, where a portion will hatch into tadpoles in three to 12 days. Tadpoles develop into tiny toadlets at around 2 months of age, around which time they’ll leave the water. 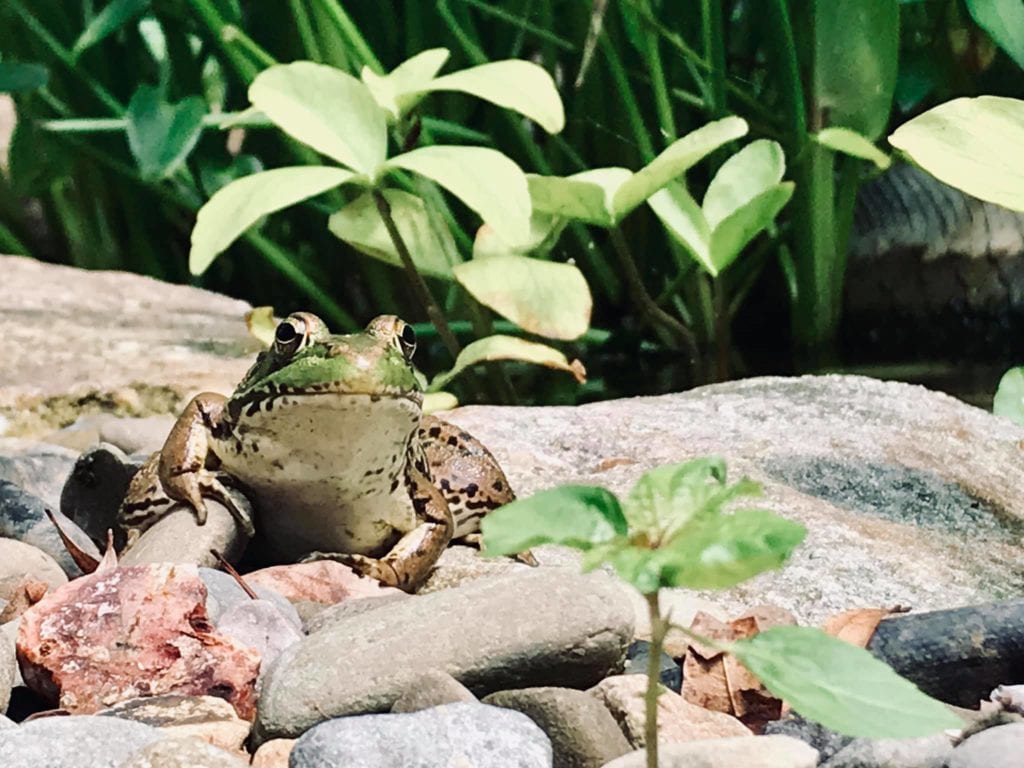 Is this a frog or a toad? The smooth skin gives away this pond-dwelling frog’s identity.

Toads are sometimes easy to mix up with another common pond visitor: frogs. Both generally make great additions to your backyard ecosystem. Want to know which one you’ve seen hopping around your pond rocks? Here are a few ways to distinguish these two animals from each other:

What Kinds of Fish Can I Put In My Pond?

Butterfly Koi: What They Are and How to Care for Them

What Do Frogs Do All Winter?