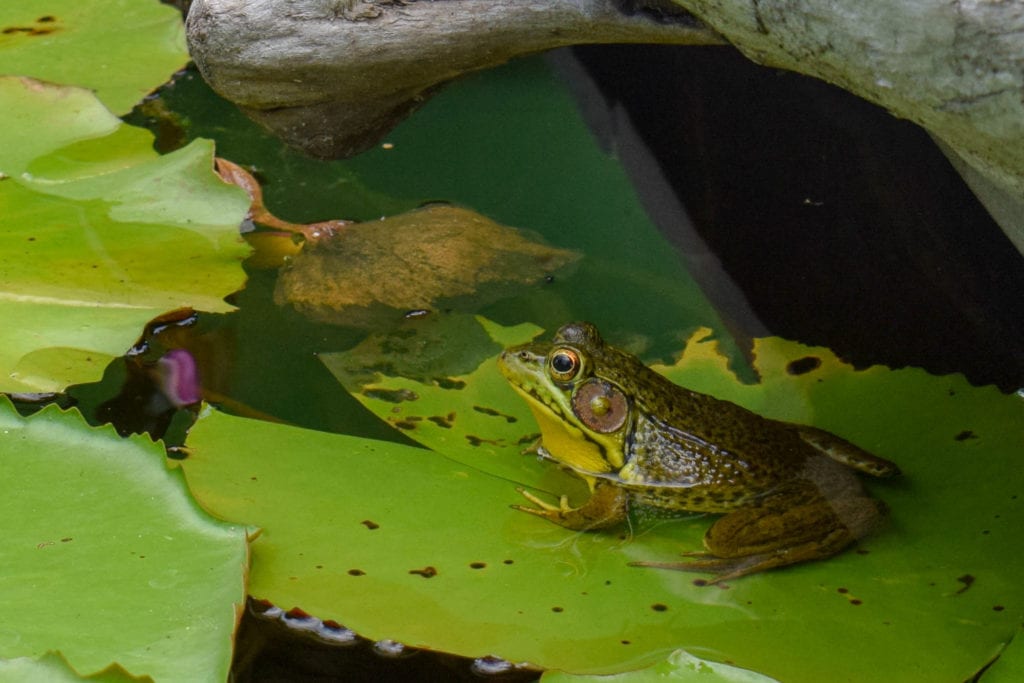 That’s not a banjo player you hear in your pond. It’s probably just a Green Frog.

Northern Green Frogs (Rana clamitans melanota) live throughout the eastern United States and Canada, hanging out in abundance in ponds, marshes and other wet habitats. Their most distinguishing characteristic is their unusual, single-note call, which sounds like someone plucking a stringed instrument.

These amphibians love visiting backyard ponds, including ours here at Splash. Consider their presence one of the many perks of creating a backyard ecosystem. If you build it …

At a Glance: Meet the Northern Green Frog 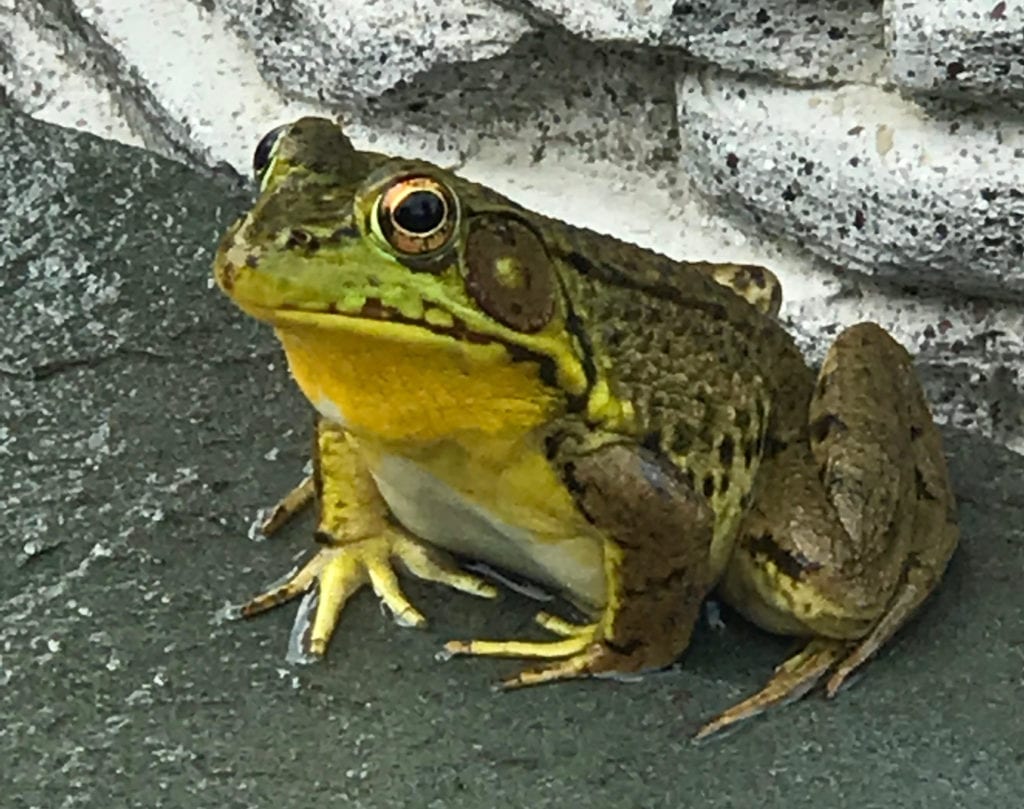 A Northern Green Frog looks exactly like what you might picture when you think of a frog: green, little and kind of slimy.

These amphibious friends are usually about 2 to 4 inches long, making them smaller than another common pond visitor: the bullfrog. Their smooth skin can sport all kinds of green hues, from metallic green to olive to greenish brown, often covered in darker spots. Green Frogs also have folds of skin called dorsolateral ridges that extend from above their eardrums to about halfway down each of their sides. These folds are another helpful tool for distinguishing Green Frogs from Bullfrogs, which don’t have them.

Green Frogs don’t say, “Ribbit.” They make a noise like a banjo string being plucked.

Compare that call to the much deeper call of the Bullfrog:

Male Green Frogs are much more vocal than females, often calling for one of two reasons: to attract a mate or to scare away rival males or perceived threats. They usually vocalize with a single note – one explosive TWANG – but sometimes repeat the note with decreasing volume or let out growls and other noises. 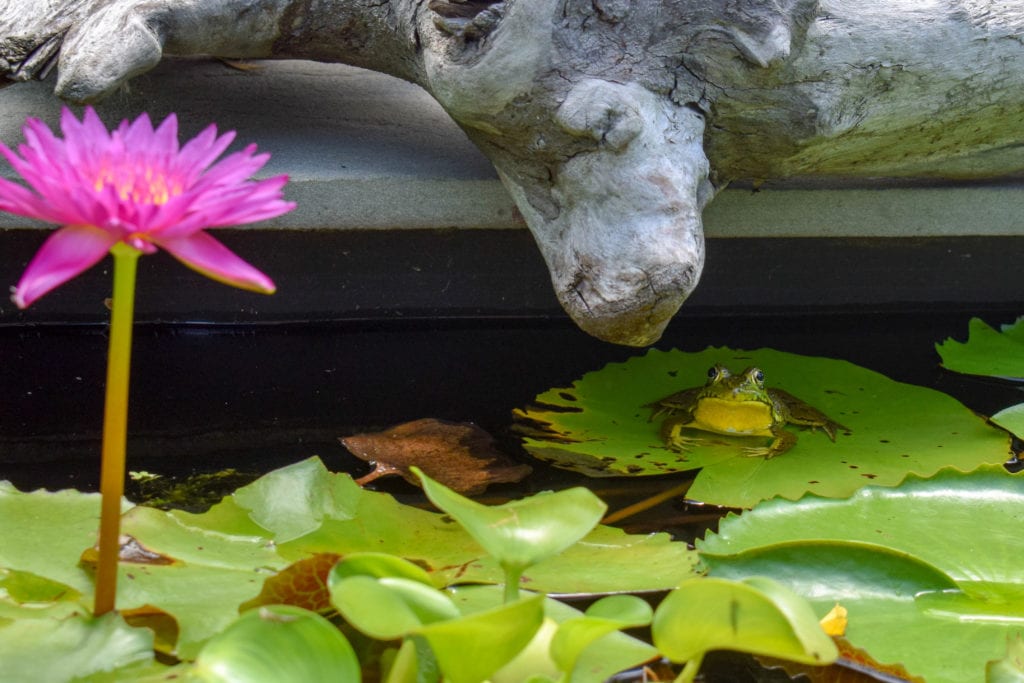 Pennsylvania and Maryland ponds are the perfect habitat for Green Frogs.

These abundant amphibians live throughout much of the eastern United States and Canada. The Northern Green Frog’s habitat extends from Quebec to Tennessee to Oklahoma, while its close relative – the Bronze Frog – prefers the southeastern states.

These frogs will live just about anywhere with a body of water – including ponds, bogs, marshes and even roadside ditches (and the tropical waterlily tank at your local pond store). They prefer to stay in or on the very edge of the water but will stray to other areas during wet weather.

Green Frogs are primarily carnivores and will eat just about any critters small enough to fit in their mouths. Popular snacks include bug larvae, worms and even little fish. These opportunistic hunters typically wait for their food to come to them, sitting still for hours until something bite-sized makes the mistake of coming near. 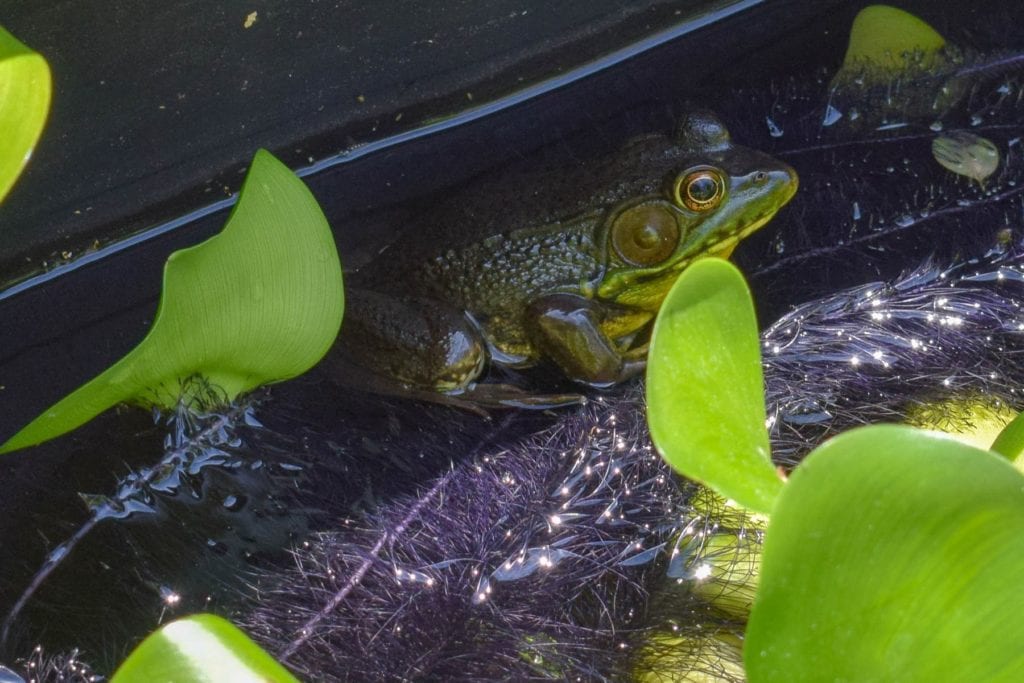 Green Frogs mate from about May to August in Pennsylvania. Males use their throaty, twangy calls to draw in the lady frogs, with smaller males sometimes hovering near more dominant callers so they can swoop in and steal the attracted females.

During each mating, the female releases three or four clutches of eggs into the water, where the males fertilize them. Each gelatinous clutch has 1,500 to 4,000 eggs – a very small portion of which will hatch into tadpoles within a few days. An even smaller portion of those tadpoles will grow into adult frogs.

If you find tadpoles in you pond, congratulations! You’ve created a healthy backyard ecosystem. Frogs have semi-permeable skin, which means they’re extra sensitive to pollutants. If frogs have chosen your pond as the place to have their young, then you know you’ve done your part to help the environment.

Just like your koi and goldfish, your resident Green Frogs will survive the winter outside just fine.

How do they do it? Like many amphibians, Green Frogs partially bury themselves in the mud over the winter to stay warm – keeping themselves exposed just enough to take in oxygen. Any bit of mud will do – a plant pocket, a plant pot or anywhere else they can squeeze in to hibernate until spring. 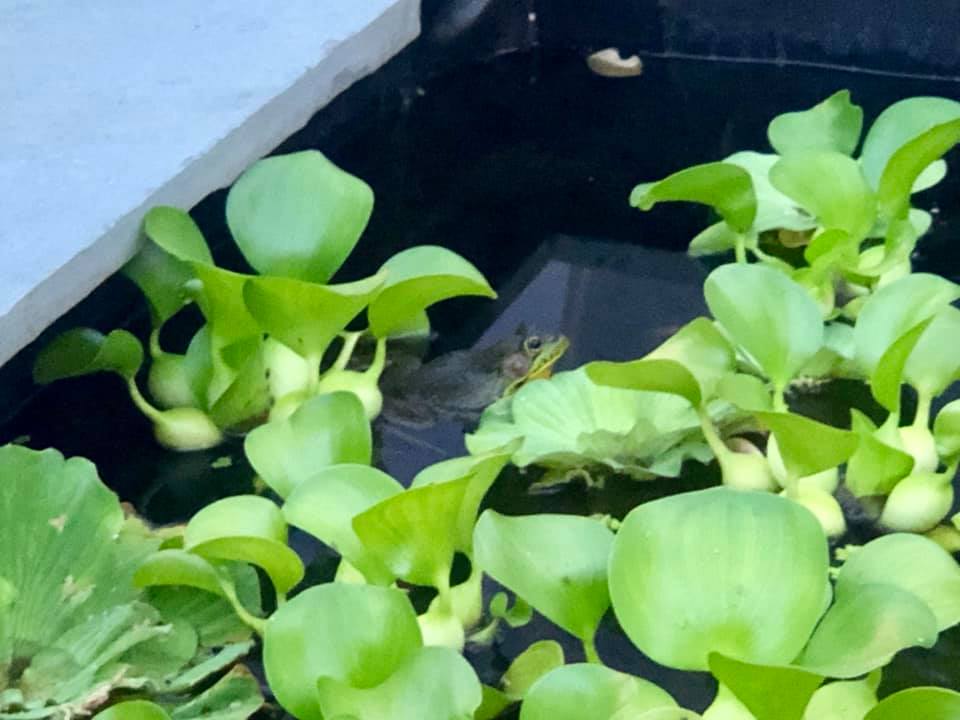 Both frogs and toads make great additions to your backyard ecosystem. Want to know which one you’ve seen hopping around your pond rocks? Here are a few ways to distinguish these two animals from each other:

What Kinds of Fish Can I Put In My Pond?

Butterfly Koi: What They Are and How to Care for Them