What’s the difference between koi and goldfish? 4 factors to consider for your pond 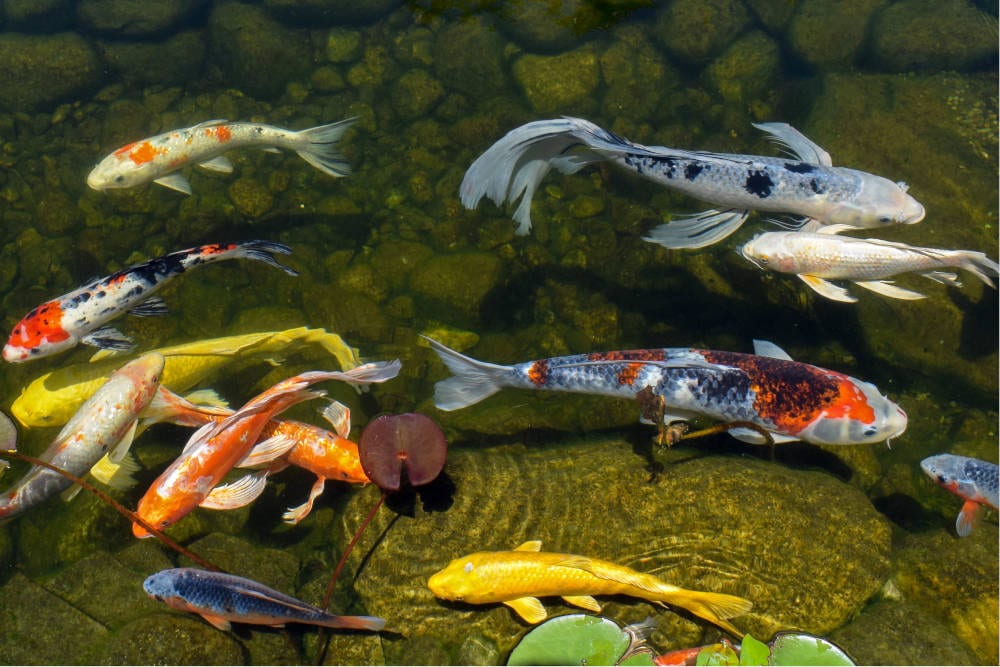 To koi or not to koi?

Catfish, orfes and all other kinds of finned friends can call your pond home.Â Koi and goldfish, though, are by far the most popular and familiar fish for many pond owners.

Both fish will do well in many ponds and can even co-mingle provided they have enough space. They are, though, two distinct animals with their own specific needs. Here are a few facts to help you decide who gets the privilege of hanging out in your pond:

At a Glance: Differences between Koi and Goldfish

Contrary to myth, a koi fish will not stop growing when it gets too big for its pond. It will actually grow as large as its genetics allow – and a big koi in a small pond is an unhappy fish in an unhealthy environment.

Some varieties of koi can grow up to 3 feet long, whereas most goldfish won’t exceed 7 to 8 inches. So if your pond is small, start with goldfish.

In addition to needing space to accommodate their larger size, koi need enough room to exercise their horizontal and vertical swimming muscles, as well as to get away from predators like heron. Deeper water also helps keep water temperatures more consistent, which helps koi survive winter cold and summer heat.

Just because goldfish are small, though, doesn’t mean you can cram as many as you want into your pond. The rule of thumb for any fish is at least 10 gallons of water per inch of fish, but you’ll know you have too many if your filtration can’t keep up anymore. Failing to give any fish the room they need can lead to poorly oxygenated water, too much fish waste and, ultimately, a pond full of dead fish.

Don’t forget to plan for fish growth when you stock up your pond. As koi and goldfish get bigger, so does their need for space. 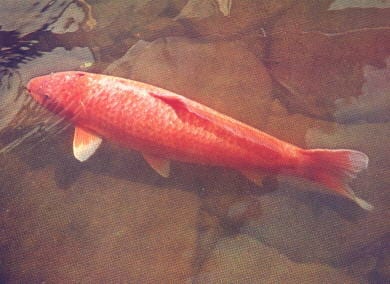 If you wanted to celebrate your koi’s birthday (go ahead; we won’t judge), you might have to haul out up 30 candles in his elder years.

Koi have an average lifespan of 20 to 30 years in the right conditions. We’ve even had customers pass down koi through multiple family generations. Even the hardiest goldfish, on the other hand, usually won’t live to see their 15th birthday.

Of course, every species has its outliers when it comes to life expectancy. A koi named Hanako – Japanese for “flower girl” – reportedly died at the ripe age of 226 in 1977 (although some experts doubt the credibility of that claim.) The oldest goldfish was supposedly a carnival prize named Goldie, whose owner claims she died at age 45.

Big koi aren’t for the faint of budget.

While small koi – which are a little bigger than a carnival goldfish – generally cost under $20, the big beauties can cost $350 or more. You could always buy a little guy and wait for him to grow up, but expect to wait eight to 10 years for your little buddy to reach the size of the premium koi you see in our store.

Goldfish are the more budget-friendly option. Most cost under $10.

What exactly makes koi so much more expensive than their goldfish cousins? The answer lies largely in the breed’s history as a show fish. Breeders spend decades perfecting their koi lineage, selecting fish for their color, shape, size and other aesthetic attributes. The fact that koi take years to mature also contributes to their price. Whereas a show dog is valuable as a puppy, koi take years to reach an adult size. Their patterns also don’t fully develop until several years into their lifespans, meaning serious koi hobbyists often have to wait years to find out if a potential best-in-show fish will stay that way through its lifespan.

Professional koi keepers see their animals as a serious investment. The most expensive koi ever sold reportedly fetched about $2.2 million in today’s dollars.

Of course, you don’t need to dump millions, thousands or even hundreds of dollars into a fish to enjoy it. Even goldfish come in a surprising variety of colors and patterns that will add beauty to any pond.

4. Koi and goldfish are different animals

Koi and goldfish actually both descended from varieties of Asian carp but have grown into two distinct species. Koi usually (but not always) have barbs protruding from their lips that help them rummage for food along the bottom of a pond, while goldfish do not. Koi’s bodies are tapered at each end, whereas goldfish have rounded bodies with blunt noses.

Koi also tend to have showier colors than their less expensive counterparts – but that doesn’t mean all goldfish are plain gold. In addition to classic solid colors like orange, yellow and red, goldfish also come in red-and-white varieties (called sarassa), as well as blue and orange with dark specks (called shubunkin).

Despite their differences, koi and goldfish can usually live together in peace, with a few precautions. Koi will not actively hunt goldfish, but they will swallow anything that fits in their mouths – including baby or tiny fish that swim within reach. A big koi could also out-compete a small goldfish for food, so make sure everyone has plenty to eat.

Koi and goldfish can even cross-breed on rare occasions, producing sterile offspring.