How to Stop Herons & Other Predators from Eating Your Fish

You have dozens of fish that you’ve spent years raising into beautiful, beloved pets. They take treats out of your hand, and everyone who visits can’t wait to check out your finned friends.

Then you glance out the window and catch a heron flying away with your 20-year-old koi.

Birds – herons in particular – and other predators, like raccoons and mink, are the bane of any pond owner’s existence. But don’t take any drastic measures just yet. You have a few options for keeping the birds at bay.

At a Glance: How to Stop Predators from Eating Pond Fish

So who exactly are the culprits making fish disappear from your pond?

If you live in the Northeast U.S., you probably have a bird to blame. Herons are the most common culprits, but ospreys, egrets, hawks, eagles and other feathered fishermen all sometimes take advantage of the all-you-can-eat fish buffets we build in our backyards. Ground-dwelling predators, like minks and raccoons, also occasionally dip in for a treat.

We’ve found that household pets rarely bother pond fish. Lots of our pond owners have dogs that drink from or even play in their ponds without issue. Neighborhood cats likewise tend to leave fish alone, preferring to watch them from the safety of dry land. 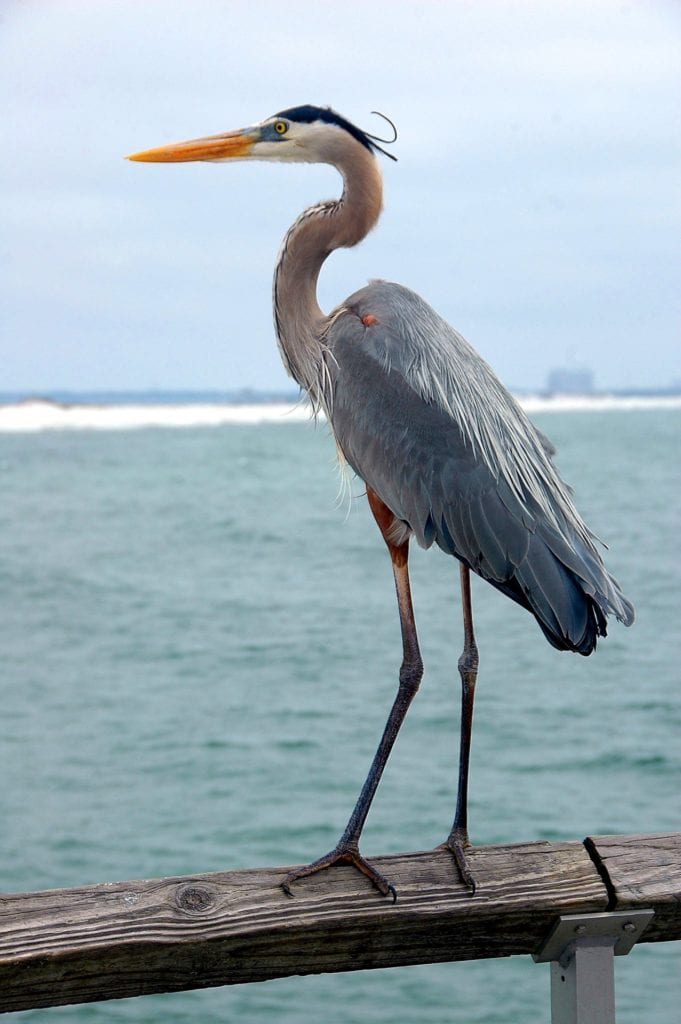 3 Ways to Protect Fish from Predators

Pond owners usually find out they have a predator problem in one of three ways.

The most common one is fish simply disappearing. They can’t walk out of the pond, so the next best guess is a hungry critter on the prowl. Other pond owners actually see herons or other prey staking out their pond, while others find the remains of dead fish in their yards. (A heron will pick up and kill large koi, even if they end up being too big to eat!).

So what do you do if you find yourself in one of these situations? We recommend trying one of the following solutions: 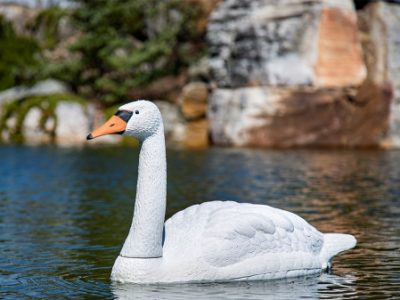 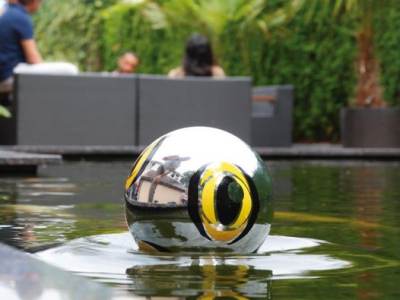 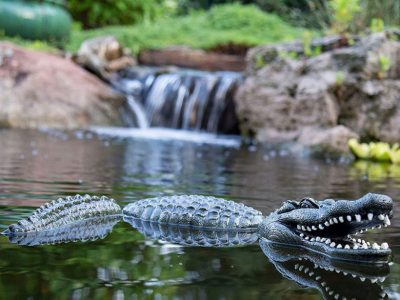 Herons aren’t as bird-brained as we like to think.

Decoy herons are probably the best-selling predator deterrents on the market. Herons are solitary predators, and, the logic goes, will avoid a pond another bird has already claimed as its own.

But we’ll let you in on a secret: Heron decoys don’t work. At least not very well.

Herons are smart animals, and they’ll figure out pretty quickly that the bird staring at them from the edge of your pond isn’t moving. That’s why we prefer decoys that float in the pond. These kinds of deterrents move with the flow of the water, creating the illusion of a living animal.

Our go-to decoys include floating swans and floating alligators. (Even if you live in a northern state, herons know not to mess with alligators because they encounter them during migration). We have also had luck with Heron Stop Reflectors: shiny, floating balls painted with large eye patterns.

If you do want to try your lucky with a heron decoy (or even a painted yard flamingo), moving the decoy to a different spot by your pond every couple days will probably give you the best results. Some people similarly find success with rubber snakes that they move around their ponds. Still, herons are intelligent birds, and your attempts to trick them probably won’t work for very long. 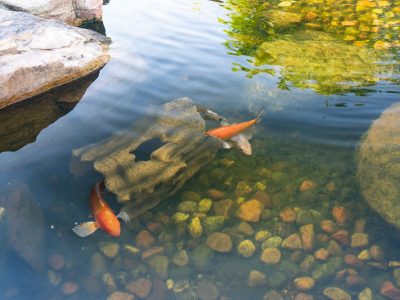 Fish in the wild depend on their camouflage to avoid predators. Not so for the orange and yellow koi in your pond.

The combination of brightly colored fish and shallow water in most backyard ponds make them the perfect all-you-can-eat buffets for predators. A few fish caves will help your fish hide, despite the brightly colored targets on their scales.

Fish caves are underwater structures that give your finned friends a place to hang out when predators loom overhead. They can be built into the pond, or they can be purchased and placed into existing ponds.

Plants that cover the surface of the pond can also give fish a place to hide. Waterlilies, water hyacinths and water lettuce all make great surface cover. In addition to shielding your finned friends from predators, these plants will provide much-welcomed shade on hot days, beautify the pond and help remove algae-feeding nutrients from the water.

(Most aquatic foliage will die back in the winter, so even if you have plenty of plants during the warm months, you’ll still need fish caves to keep fish safe in colder weather.) 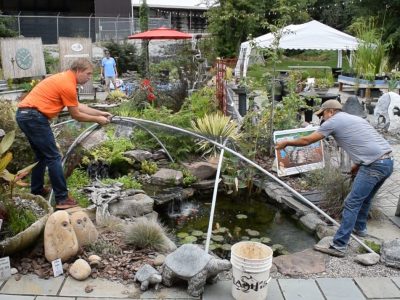 Sometimes a net is the only way to keep a particularly stubborn (and hungry) heron away from your fish. We uslaly go to netting as a last resort, though, because it obstructs the view of the pond.

The best way to install netting is to start with a dome-shaped frame placed over the pond (we like to use PVC electrical conduit from the hardware store). Make the dome high enough to cover any tall plants that you don’t want to trim back. Next, take your netting and place it over the dome, securing it in place with zip ties. Remember to buy enough netting to account for the height of the frame.

(In addition to deterring birds, netting is also helpful in the fall for keeping leaves out of your pond. Learn more here.)

What about Fishing Line?

While we can sometimes deter herons with a strategic criss-cross of wires over the pond, simply stringing some fishing line across the water won’t cut it. As the video above shows, herons are too smart for that. They’ll just step right over and proceed with their dinner.

It’s good to know your enemy. Great Blue Herons are actually pretty interesting creatures, once you look past their fish-stealing tendencies:

How to Care for Pond Fish – The Ultimate Guide

How to Take Care of Your Ecosystem Pond

I Bought a House with a Pond. Now What?

How Often Should I Feed My Fish?

How to Care for Koi and Goldfish in Winter

How Many Fish Can I Have in My Pond?