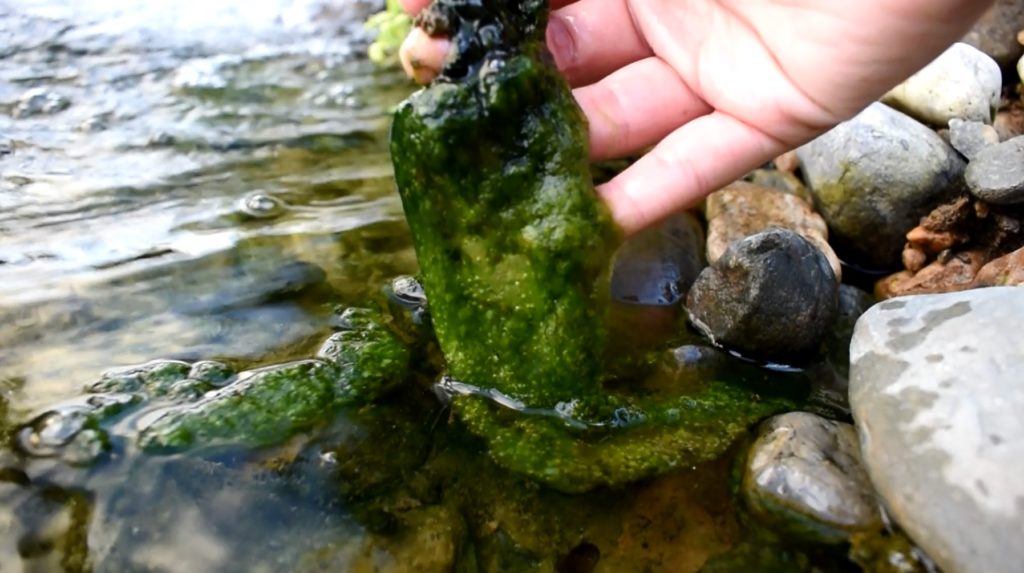 Plants will always be your first defense against string algae. Some pond owners, however, like to add other tools to their arsenal to keep their water feature looking extra polished.

Barley straw is one of those tools.

Barley straw – in bales, pellets or extracts – is often touted as a natural solution for certain algae problems. Europeans have used it for hundreds of years to help prevent algae blooms in pond and lakes, and scientists have spent the past several decades trying to determine how it actually works.

Here’s our take: Some pond owners find that barley straw – especially in extract form – helps prevent new string algae growth, and there’s certainly no harm in trying it. That’s why barley straw extract is one of our Top 5 Favorite Pond Water Treatments.

Still,  barley is by no means a quick fix or one that works for everyone. If you’re dealing with excess string algae, we recommend adding more plants to your pond before or in addition to trying barley. Each type of plant you add will remove a different kind of nutrient from the water, starving string algae and giving you a natural, long-term solution. 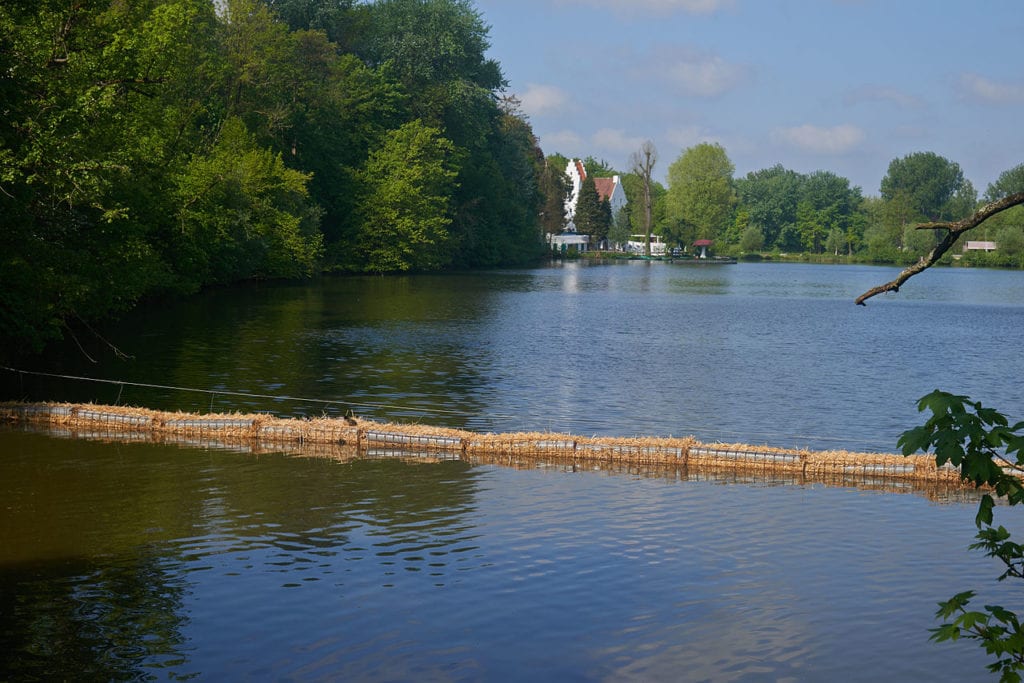 Barley straw is used for algae control in a Belgian pond. Photo By Wouter Hagens

Here’s the theory about how barley straw might prevent string algae:

Barley decomposes in the pond. Over time, it releases chemicals into the surrounding water. When those chemicals interact with sunlight and oxygen, the theory goes, they produce another substance that’s similar to hydrogen peroxide. This hydrogen peroxide-like chemical creates water conditions that prevent new string algae from forming. Barley straw pellets and extracts seem to produce results similar to those of barley bales.

Researchers debate the details of how this process works, including the exact type of chemicals the barley releases into the water and why those chemicals seem, in some cases, to prevent algae growth. Additionally, the EPA does not consider barley straw products a pesticide, and retailers cannot sell them with the claim that they do anything to prevent or control algae growth.

Here’s the verdict from the Penn State agricultural extension:

Barley straw does not kill existing algae, but it inhibits the new growth of algae. The exact mechanism is poorly understood, but it seems that barley straw, when exposed to sunlight and in the presence of oxygen, produces a chemical that inhibits algae growth. (Read more)

What Barley Won’t Do

We can’t say for sure that barley straw will do anything to help your algae woes. Some of our customers who have tried it say it helps somewhat, while others say it didn’t do anything.

Here’s what barley likely won’t do: Rid your pond of existing algae. Barley straw is purely preventative, so you’ll need to take other steps if you want to get rid of algae right away. That usually means removing it manually with your hands and a bucket, potentially with the help of a contact algaecide. And – we’ll say it again – your best long-term defense against string algae is to add more plants to your pond.

Barley also probably won’t prevent the type of algae that turns your water green. Your pond gets two basic types of algae: green-water algae, which is too tiny to pick up and makes your pond look like pea soup, and string algae, which clings to your rocks or floats on the surface. Although scientific studies haven’t conclusively proven one way or another whether barley does anything for green-water algae, our customers usually say it doesn’t. 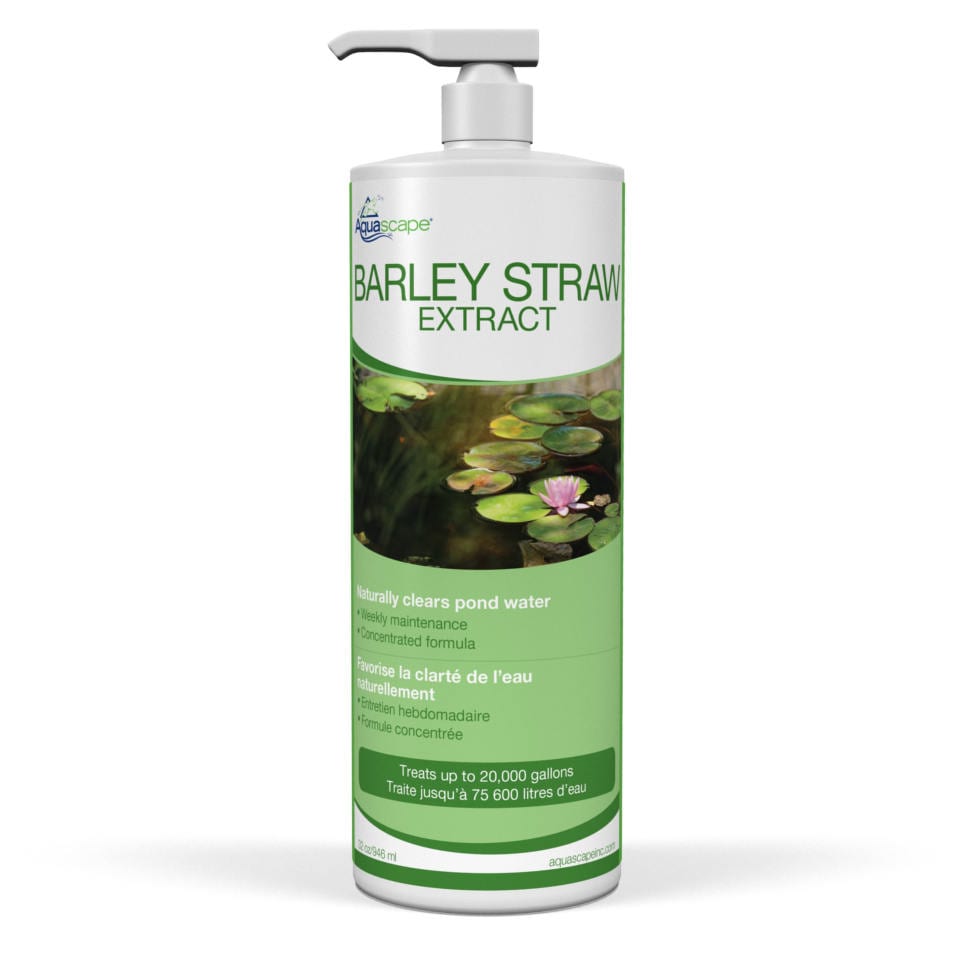 Here’s why: Barley only works when it’s decomposing. If you add bales of barley to your pond, you’ll have to wait at least two weeks – and sometimes up to eight – to start seeing results. After the decomposition process starts, the bale will only continue working for a little while before it turns into useless mush. For continuous algae control, then, you almost need to have two batches of barley in your pond at all times: one that’s already far enough in the decomposition process to do its job, and a fresh one that’s in the process of decomposing.

Any organic material in your pond – fish waste, dead leaves or barley straw – can make your pond mucky and will emit ammonia as it decomposes. Ammonia can kill fish. If you decide to use barley straw bales, be diligent about replacing them as needed, and make sure you have adequate filtration, beneficial bacteria and aeration in your pond to counteract the byproducts of decomposition.

Barley straw pellets work a little faster and are typically less messy than barley straw bales, but we’ve found that extract typically works best. The liquid extract doesn’t make a mess in your pond, and it’s formulated to act quickly. Some brands also have added enzymes that help break down pond sludge.

If you decide to try barley straw extract, make sure to carefully follow the application and dosing instructions on the bottle.

Here’s the bottom line when it comes to barley straw: Some people like it, some people don’t. If you want to see what it does in your pond, there’s no harm in giving it a try.

Plants, however, remain our first choice for string algae control.

Each type of plant you add to your pond eats a different kind of nitrate. A red leaf will consume one kind, a green leaf another. Waterlilies pull up some, and hyacinths take in other types.

String algae eat these same nitrates – but they’re opportunistic eaters, meaning they’ll take in any kind they can get. The more and the wider variety of plants you add to your pond, then, the less food is left for string algae. Pond plants essentially starve string algae out of existence.

Remember, too, that string algae is not inherently bad. You’ll likely always see a little bit of it growing in your pond. It’s a natural part of the pond ecosystem, and it won’t hurt your fish.

So if you don’t mind seeing a little bit of the green gunk hanging around your pond, don’t feel guilty about leaving it there.

How a Pond Ecosystem Works

How to Get Rid of String Algae in Your Pond